Note taking can feel like the most boring thing in the universe.  Spending hour after hour, scribbling away on the endless lines of the page, until your hand is stained in ink and has shrivelled away into something that looks like the hand of a 96 year-old wizard. And then to top it all off – the second we look away from the notes, we can’t remember any of them.

Well, here’s where most students are going wrong. Right now – I’m going to give you something called ‘The Lion King Challenge’. What I want you to do is – in 15 seconds, using only 5 phrases, try and explain the story of The Lion King – say it out loud, or try and explain it to a parent or friend.

Now – most people find that quite easy to do and maybe it sounded something like this:

Once there was a lion named ‘Simba’
His dad ‘Mufasa’, who was king of the jungle, is killed by Simba’s evil uncle, ‘Scar’
Simba goes crazy and runs away deep into the jungle
He sings a load of songs with a warthog and meerkat-type thing
Then he realises Scar killed his dad and goes back to take revenge

Now, in those five sentences, which I could have said in 15 seconds, we’ve captured the whole plot of a film that lasts for 1 hour, 28 minutes.

If you were going to have an exam on The Lion King tomorrow, would you:

A. Remember the key bits of the film and pad them out in the exam?

B. Try and remember every second of the 1 hour 28 minutes?

Option ‘A’ - of course! It’s pretty obvious that we don’t need every detail from every second to know what the film is about.

So it doesn’t make sense to think that you will only understand something if you have pages and pages of notes – there’s a much easier solution.

I’m now going to introduce you to something called the ‘Cornell System of Note Taking’ which saves us two things we lose when we do too many notes – time and effort. Here’s how it works:

1. Firstly, you want to draw a vertical line down the page.

Imagine that there are three columns on your page, after the first one from the left – that’s where you draw the vertical line, so that the page is basically split 1/3 to 2/3. This narrow column on the left is called the ‘recall column’. This column is specially reserved for key words and phrases.

2. The right hand column is where you take notes, write questions and build explanations.

Say for example you had written ‘Simba’ in the left hand column – on the right hand side, you could then start to bulk out the keyword with facts, explanations and ideas.

3. The last step is to memorise.

This can be done through simple reviewing – which means going over notes after you’ve taken them. Try covering up the right hand column with your hand, and seeing how much you can remember just from seeing the keywords on the left. Once you’ve mastered this – you’re in a great position because you can walk into a test with only a handful of notes, but notes that trigger a huge selection of information. Try and review your notes as often as you can –perhaps set yourself a target of at least 10 minutes a week. 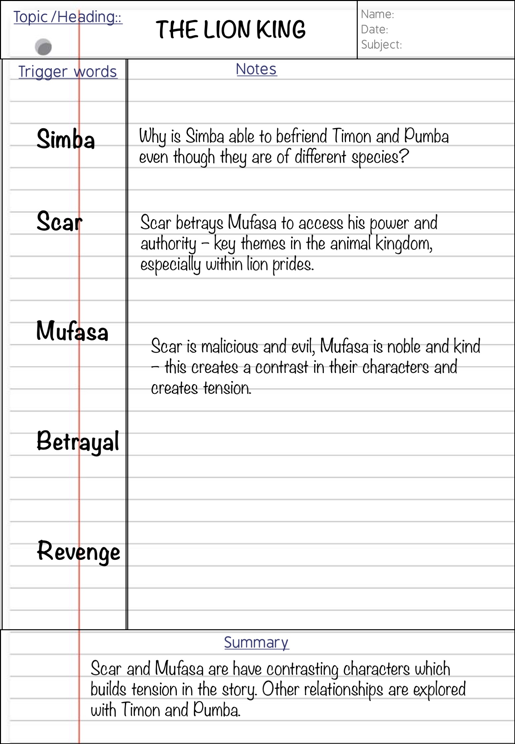 That's a really good idea, I think this is what I'll do from now on.